skip to main | skip to sidebar

Stapler of the Week Archive- Zenith 548 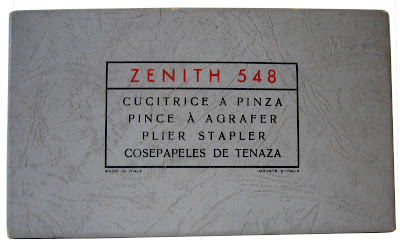 I am always on the lookout for my favorites and finding a Zenith plier stapler with original packaging is quite a treat.  My previous Zenith Stapler of the Week offerings have been the 551, 548/E & 548/E7 and now I present the 548.  There isn't too much variation between the 548s.  This version has one feature my other examples do not, the ability to both staple and pin by means of a sliding anvil.  The Zenith company website shows this feature is also available in other versions.  The 548 seems to be a slightly higher quality model with nickle-plated brass parts also available in gold-plate.  The box also reveals that the different staple sizes were noted by the color of the box they were packaged in, the 548 staples, for example, came in a blue box.  This explains the inscription of blue box in four languages on both the 548 and 548/E.

According to Zenith's history, the numbers of the models seem to correspond with the year they were introduced, the 548 in 1948, the 551 (I assume) in 1951 and later the 590 in 1990 and 595 in 1995.  I've always wondered at the seemingly arbitrary nature of model numbers.  This bit of information gives me hope that someday, the mystery of Swingline's later stapler models will be revealed.

I was very interested to see a photo of the Zenith 548 with its original box. I have the same stapler (black with chrome trim) and its original box on my desk in front of me. I would like to sell it at some stage.??

Stapler of the Week